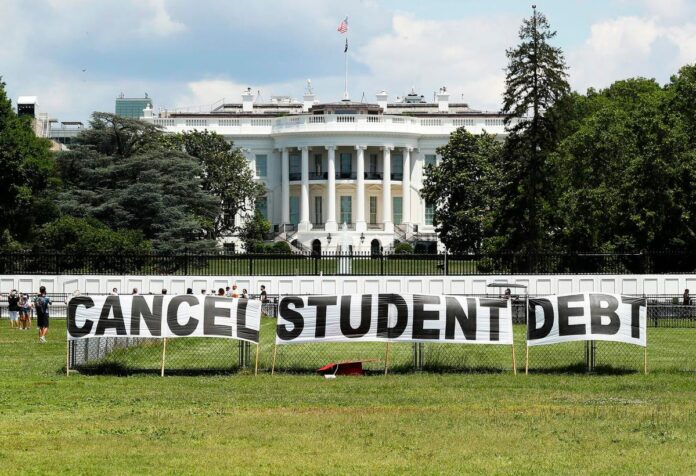 Last week, President Biden reportedly told a group of lawmakers who urged him to cancel at least $10,000 of student debt for every borrower through executive action, “you’re going to like what I do on that.” Although there are some worthwhile forms of debt forgiveness, these reports are cause for concern. Broad debt cancellation would be an expensive, regressive giveaway to affluent households that worsens inflation and detracts from more meaningful efforts to address the college affordability crisis.

Student loan debt is disproportionately held by affluent households because the degree they borrowed money to pursue enhances their earning power. Considering the enormous costs of a college education today, it makes sense to offer relief to borrowers with low lifetime incomes – people who are stuck with the debt of degrees without being able to reap the financial benefits. That’s why I urged President Biden last year to expand and reform income-driven repayment programs that directly tie debt cancellation to a borrower’s ability to pay.

But broader student debt cancellation is a regressive transfer of wealth from lower- and middle-income workers to high-income professionals. President Biden has already cancelled more student loan debt than any president in history, largely because of his decision to repeatedly extend a moratorium on minimum payments and interest accrual. The greatest beneficiaries of this policy have been high-income professionals, such as doctors and lawyers, who have on average had at least $30,000 of debt effectively cancelled by the policy so far.

The administration is reportedly hoping to counter criticisms of regressivity by only cancelling debt for individuals who earned less than $150,000 last year. Although this would help limit giveaways to some of the wealthiest people, it’s still deeply flawed. Many people with high lifetime incomes still have individual years in which they earned less, such as a recent graduate who has not yet reached the point in their career where they will fully realize the value of their degree. Whether it’s through higher taxes or inflation, workers who didn’t go to college will bear the costs of cancelling up to $400 billion in outstanding student debt.

Why would the administration even consider such a terrible policy? Some on the left point to President Biden’s sinking approval ratings with young Americans and argue that cancelling their debt will motivate young voters to support Democrats in November’s midterm elections. But this analysis is fundamentally flawed. Championing policies to make the well-off even better off will only worsen Democrats’ challenges with working-class voters. And if the historic amount of student debt President Biden already cancelled hasn’t salvaged his popularity with young voters, why should anyone believe more would help? It’s worth noting that the majority of Americans in every age cohort don’t have any student debt, including those under 30.

Incoming and future students would in fact be the biggest losers of large-scale debt cancellation because of its impact on inflation. Money that would be spent on payments that have been either suspended or cancelled are instead being used to bid up the price of goods and services already facing sharp inflationary pressures. As a result, the Federal Reserve will have to raise interest rates even higher than they otherwise would have to stabilize prices. In other words, broad debt cancellation benefits high-income people who borrowed for their degrees in past years at the expense of higher costs to younger borrowers who already have to pay more than their predecessors because of skyrocketing tuition.

Meanwhile, the focus on student debt cancellation has drowned out any conversation about getting the underlying problem of those skyrocketing tuition costs under control. Democrats need to be discussing bold ideas like moving to three-year degree programs, tying federal support to financial accountability for universities, and expanding non-college pathways for post-secondary education. If Democrats were serious about college affordability, they would have pushed for such reforms in either their party-line budget reconciliation bill or broader bipartisan legislation.

The decision to abandon serious legislative solutions and pursue broad debt cancellation through an executive order would create even more problems. Previously, Biden only said he would sign a bill cancelling up to $10,000 per borrower if Congress passed one. In that scenario, lawmakers would have been forced to debate the trade-offs and pressured to offset the costs. Attempting to circumvent this process with an executive order – something which both members of his administration and House Speaker Nancy Pelosi have said he lacks the authority to do – would represent a clear reversal of Biden’s earlier commitments to the American people.

It would also throw millions of borrowers into financial uncertainty as the status of their debt spends months or even years in legal limbo. Even a politically neutral Supreme Court would be unlikely to find the president has the authority to unilaterally spend hundreds of billions of dollars without Congressional approval, let alone one packed with Republican appointees.

On the off chance the courts did find the president technically had statutory authority for such an unprecedented act, the next Republican Congress would be compelled to significantly curtail the president’s discretion in administering student loans to prevent future presidents from abusing that authority. This move would unfortunately preclude Biden and his successors from offering targeted debt relief in the future to borrowers who truly need it, as Presidents Obama and Biden previously did.

Attempting to cancel a previous generation’s debts without a plan for preventing the next generation from ending up in the same (or worse) situation merely kicks the can down the road and makes the problem harder to solve. It is also unlikely to relieve pressure from those on Biden’s left, who have made clear that they will continue to push for at least $50,000 of debt cancellation for all borrowers, regardless of income – an even worse policy than the one currently being considered.

President Biden should eschew expensive, regressive, and inflationary schemes for broad student debt cancellation and return the focus where it needs to be: controlling the underlying cost of higher education and providing relief for low-income Americans who are unable to pay for it.

Recovering the Path to Manhood