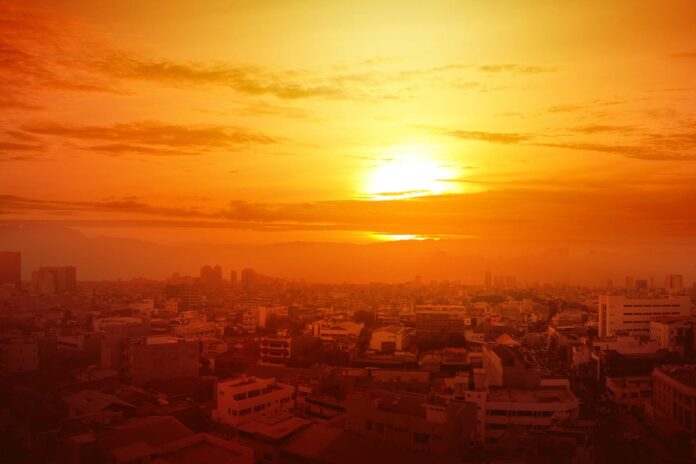 The numbers are scary. Forbes’ Brian Bushard tells us over two dozen US cities already have broken heat records this month, and more cities will break records in the next few days. We need dramatic climate action to head off even greater pain and disruption.

Bushard notes that “over 75 million people were placed under heat advisories” in just the first two days of the heat wave. That’s 22.5% of the nation’s entire population, with more to come as the heat wave spreads. During this record-breaking heat wave, cities face rising deaths concentrated among their vulnerable populations.

As the economy grows, it will mainly grow in cities and metropolitan areas, meaning more urban heat risks coupled with economic growth.

My New School colleague Timon McPhearson, Director of the New School’s Urban Systems Lab and an expert in urban ecology and climate, documents how climate damage is caused by and intersects with city design and equity issues. In a 2021 article co-authored with other experts, he describes how our interlocking urban and climate problems are growing.

Here’s the grim picture they describe: “rapid urbanization has driven exponential consumptive demand for natural resources, energy, and built infrastructure, largely using outmoded 20th century design and construction techniques. This demand has generated interdependent and cascading risks, and threatens the resilience of human, ecological, and infrastructure systems, especially in urban areas where the majority of humans and infrastructure are concentrated.”

McPhearson and others have mapped urban “heat islands” where extreme temperatures and risks are concentrated. These are found more often in poor neighborhoods. Like other inequalities in our society, the risks and harm from heat and other climate changes fall most heavily on people who are poor and discriminated against.

McPhearson notes that city design and “decades of racist policies” have concentrated poor and non-white people in areas with less tree cover and parks, in badly designed buildings and neighborhoods that increase heat risks. Bad urban design adds to heat risks, with poorly ventilated and heat-trapping buildings, excessive car use that pollutes the air and fosters mile after mile of heat-retaining asphalt paving, and air conditioning that can make heat problems worse due to poor technology and carbon-generating electricity supplies.

And as the economy grows, urban populations keep growing. So our climate problem increasingly is an urban problem, and will be for the foreseeable future. (Cities also can be greener with less automobile use and other benefits.) Of course, climate change is everywhere, and rural populations also face dramatic and growing risks. But as cities grow with the economy, their populations are increasingly at risk, especially the poor and most vulnerable.

Some cities are trying to adapt. Phoenix, Arizona is featured in many urban heat-related stories. The Guardian has run several stories on Phoenix, the most recent entitled “Unhoused in Phoenix’s perilous heat: ‘If I don’t keep cool I’ll die’.” Reporting on Phoenix’s unhoused people, the story notes that since 2016, heat deaths have doubled in Maricopa County (which includes Phoenix), “with unsheltered homeless people accounting for 40% of the death toll.”

In Phoenix, wealthier zip codes can be ten degrees cooler than poorer ones, even in heat waves, meaning poor people are more vulnerable to heat stroke and death. So the city is working on better risk communication, neighborhood redesign, and other mitigation strategies. It has created a new Office of Heat Response and Mitigation, directed by an Arizona State University expert.

But these well-intentioned mitigation efforts also underscore our need for more radical steps to address extreme heat and climate disruption. McPhearson and his colleagues, while realists, also want to resist the “dominant dystopian futures” associated with climate change. They call for “new, more radical, and urgently needed systems-based policy, planning, design, and management approaches” to fight climate change and its dangers.

Phoenix, along with other heat-oppressed cities—and all of us—must hear this call to action. Splash pads and swimming pools, text alerts of heat waves, and neighborhood cooling centers won’t be enough if we keep pushing temperatures ever higher through our carbon-burning, climate disrupting, heat generating behaviors and unequal economic practices. The extreme heat waves killing people in our cities is just one more illustration of why we need radical change on climate policy.